How does smooth wall carbon steel perform in an abrasive and corrosive environment?

Throughout the United States, there are millions of culverts that have exceeded their design life. Some of these antique structures were built by stone masons and craftsmen over 100 years ago, while others were installed using steel and concrete products that that have rusted or crumbled over time. It’s common to see news reports about failing bridges and roads which have collapsed into sink holes or are blocked by flooding. Depending on their size, culverts are often “out-of-sight and out-of-mind” until a road collapses or a sinkhole appears. As the necessity for a healthy national roadway infrastructure grows more and more prevalent, we should not overlook the significant role culvert’s play in infrastructure design and performance.

However, culverts are more than just a component of the highway infrastructure. They serve an important purpose to carry drainage water from one side of a road or railway to another; in addition, they also serve a bridge function in order to transport the traveling public across waterways. Culverts are most commonly made from corrugated metal pipe (CMP) or concrete, and are characterized as having unsupported spans of less than 20ft. The overall condition of the approximate 4 million miles of culverts across the country varies, but many have been in service for 30-70 years and are reaching the end of their designed service life.

When discussing long term culvert performance, one must consider the effect environmental factors will have on the culvert. Soil conditions and common sediments create scour, which when carried through the culvert acts as an abrasive to the bottom invert of the pipe. In many structures, the invert of the culvert is coated with an asphaltic or epoxy resin in order to protect the pipe from corrosion. However, towards the upper end of flow velocity ranges in a moderately abrasive environment, these coatings are generally ineffective as scour will erode the protective coating away. Continuation of this abrasion, if gone unchecked, can and will lead to the creation of voids under and around the culvert, and increase the likelihood that the culvert will fail.

In order to better understand how culverts, perform under abrasive site conditions, the California Department of Transportation (CALTRANS) conducted a field study to measure the level of abrasive resistance of some of the most common culvert materials. The study tracked the performance of 17 different materials over a 5-year period. The data collected was compared to other known abrasive sites around the state and abrasion studies as a basis to update culvert design guidance.

The blue graph depicts the wear rate in millimeters recorded for each material type. It was found that during the initial 5-year period (2001-2005), Smooth Wall Steel Plate recorded the lowest abrasive wear, while pipe made with Calcium Aluminate concrete had the highest. In 2006 a large-scale storm event washed away 15 of the materials leaving the steel plate and HDPE Samples. The purple graph reflects the spike in abrasion during the heavy events of 2006. We should note that, eventually any coating can be eroded or broken away, and that abrasion can accelerate the corrosive conditions to the pipe.

In 2015, CALTRANS conducted a comparable study to test the destructive resistance of steel pipe piling in corrosive soil, water, and marine environments. The study recorded that corrosion rates vary depend on the environment, as indicated below:

The significance of this studied showed that steel pipe can be used in corrosive soil or water environments, provided that adequate mitigation measures are in place. The department cited that sacrificial metal be incorporated into the design of the pipe wall thickness to compensate for the loss of metal that occurs due to corrosion. This extra metal thickness should be added to all surfaces of the pipe that interact with soil/water.

At InfraSteel, our design engineers use this data as a basis for determining the necessary wall thickness (and sacrificial steel) needed to achieve the desired design life of each liner. With the addition of copper to the chemical steel mixture, InfraSteel, is capable of providing long-term service life without the need of additional coatings, and we are confident in our 100-year life expectancy. 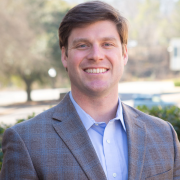 Alex is a graduate of Auburn University and an energetic and driven professional. He served in the United States Marine Corps as an Infantry Officer, and now in his role at Precision Pipe & Products, focuses on identifying infrastructure rehabilitation solutions and growing client relationships.